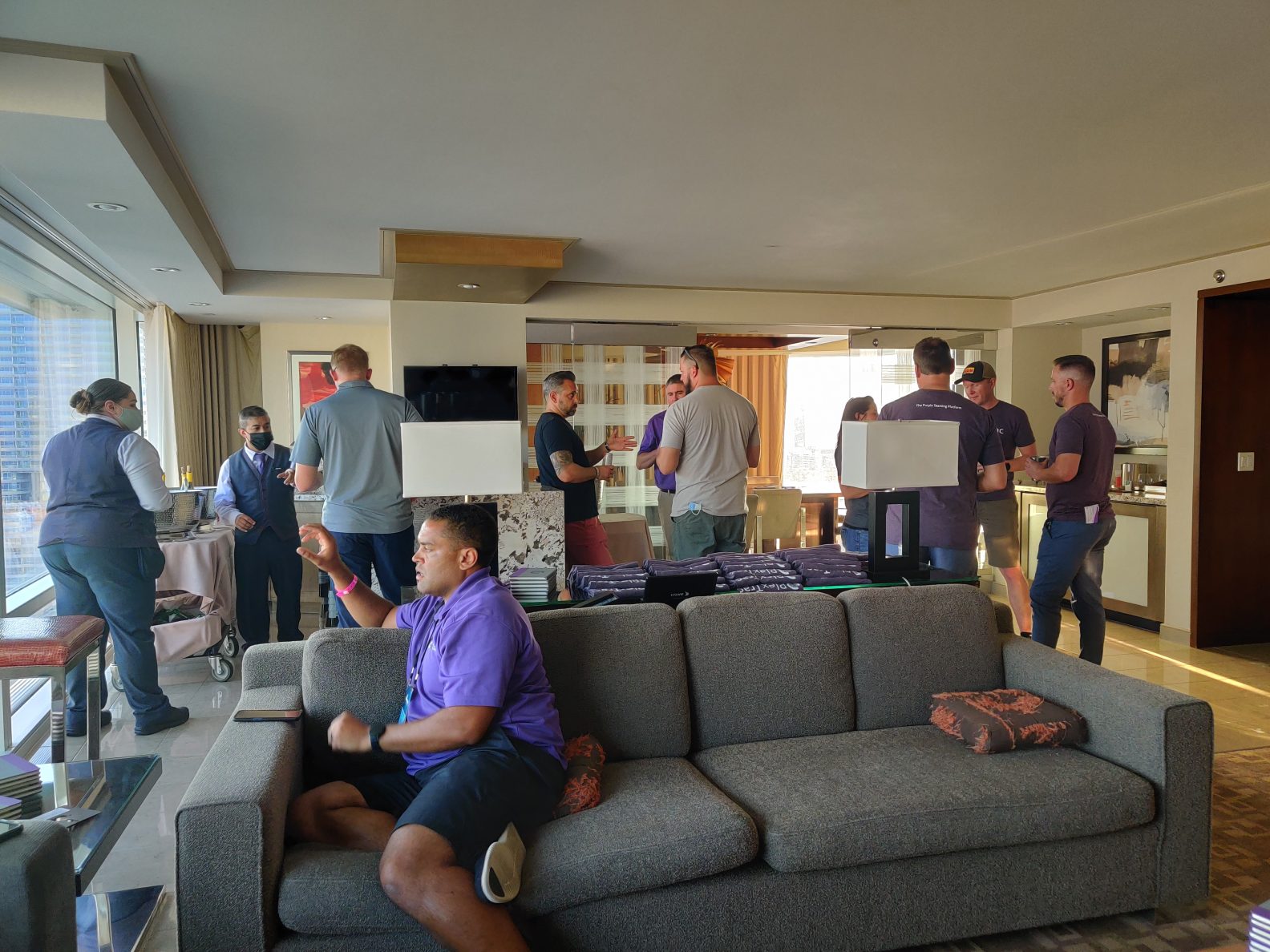 LAS VEGAS – Many entrepreneurs dream of exhibiting at a big, splashy conference and coming home with millions in orders. But such conferences can be expensive. What’s it like to attend one of them and what are some ways to do so economically?

How suite it is

Instead, DeCloss looked at another way. The company rented a suite in a hotel for the three days of the conference, hosted parties on two nights, and set up meetings with prospects to get demonstrations of the product and meet with the team.

“I’ve had that model with other vendors, and it worked very well,” DeCloss said. PlexTrac had been invited to a company hosting a similar setup at a conference two years previously. “We really liked the format of having it more private and doing demos.”

Moreover, being in a suite rather than the show floor results in more focused attention from prospects, DeCloss said.

“Would it be worth having a booth on the floor? There’s a lot of noise” – not just literally, but in the context of competition – “and so many products,” DeCloss said. The suite would also give PlexTrac a good assessment about whether a booth would be helpful in future conferences, such as the RSA Conference, next scheduled for February 2022 in San Francisco.

That led to the question of where to site the suite. “We started talking about different hotels that had nice places,” DeCloss said, such as The Cosmopolitan of Las Vegas and ARIA Resort & Casino, and talked with the hotels about costs.

“Right now, Vegas is so cheap, relative to what I was thinking,” DeCloss said. Renting a suite for the three days cost about $2,000, less than 5% the $42,000 cost of exhibit space at the conference, he said.

PlexTrac would have to pay for the cost of employees to attend either way – about eight employees, with food and lodging and airfare for them for the three days. That probably ran about $3,000 to $5,000 per person, DeCloss estimated. And then there was the swag – PlexTrac t-shirts, ball caps, reusable cups, literature and stickers.

That said, it’s a good investment. “The nice thing about this type of event is there’s a confluence of security folks, and it’s nice to meet with people,” DeCloss said. “We have a lot of meetings in, and good face time.” About 75 people registered to attend, he said. Plus, attending the conference gave employees more exposure to other companies in the security marketplace, he said.

PlexTrac also wanted to do something to grab people’s attention, so it sponsored a “capture the flag” event at the conference. “It’s common in the industry,” DeCloss said. “It’s tech challenges or puzzles, through hacking or some other kind of security exploitation on purposely vulnerable machines.”

People who solve the puzzle get a “flag,” or a hash, which is a string of characters they can submit to a server to track the results. People or teams who solved all the challenges got one of 15 special coins that PlexTrac had printed up for the event.

Typically, such events have a “red team” of attackers and a “blue team” of defenders, but fitting with PlexTrac’s branding, it combined them into a “purple team,” DeCloss said.

Another issue that came up was the COVID-19 Delta variant, which was spiking. In fact, the Friday before Black Hat started, the state of Nevada required masks to be worn indoors, even among vaccinated people.

“We took a hard look at that,” DeCloss said. “We’re all vaccinated. When we look at the data, COVID rates are rising, but it’s predominantly unvaccinated.” And while there have been breakthrough cases, the rate is low and most people aren’t getting very sick, he said. “We’re taking the right precautions, but we weren’t seeing compelling data to not do it,” he said. “We gave everyone the option. ‘If you don’t feel like coming, you don’t have to.’”

But what really cemented the decision were PlexTrac prospects, DeCloss said. “We had a lot of people set up with meetings, and we didn’t see them getting cancelled,” he said. “Our customers and prospects were still coming, so we felt we should.”

In the future, PlexTrac employees might also present at Black Hat or other conferences, though it didn’t do so this year, DeCloss said. “That’s always an aspect we’re encouraging employees to do,” he said. “As we grow, I anticipate we’ll do more of that.” For example, the company is sponsoring a smaller regional conference, GrrCon, in Grand Rapids, Michigan in September, he said.

The security industry has grown quickly, DeCloss said. His first RSA conference was in 2008, and he realized that the people after whom RSA was named – researchers Ron Rivest, Adi Shamir and Leonard Adleman – were actually there, as were public key infrastructure experts like Phil Zimmerman, who had released a system that made it easier for people to encrypt their email messages. “The first panel I went to, (PKI pioneer) Whit Diffie was on stage, and I went, ‘Wait, I know that name.’ The security industry has evolved so much in 16 years.”