Deal flow in Idaho’s startup industry shows signs of recovering from the COVID-19 slump, with the number of deals slightly increasing from 2020, though the amount was down by almost a third compared with last year. 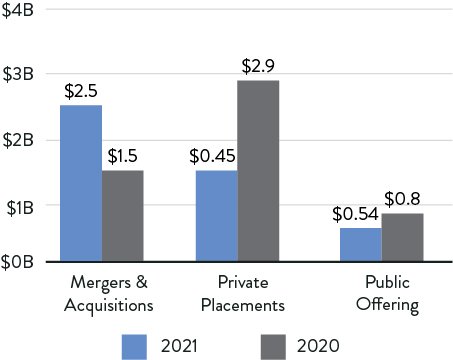 Alturas noted that, in comparison with previous years, there were more M&A deals and fewer private placement deals, but pointed out that the same trend was true nationally. Total private placement deals came in at 69 deals, compared with 71 in 2020, with a total of 83 M&A deals, the highest in the history of the Idaho Deal Flow Report, the company said. The amount of private placement funding also dropped significantly from 2020, but 2020 also featured a single $2.5 billion Albertsons investment that skewed the numbers.

As always, many deals were for undisclosed amounts, which meant that they weren’t aggregated into the totals and couldn’t be called out individually. In particular, few of the M&A deals disclosed their amounts. In addition, Alturas can only include the deals it knows about; deals that were not publicized couldn’t be included.

This year’s report also included the deeper regional and technology analysis that had been released in a separate report in 2020.

Not surprisingly, the biggest industry in 2021 with technology/software, with 56 deals – a 39% increase from 2020. Healthcare did even better as a percentage of growth, with 15 deals, for a 50% increase. Financial services dropped to six deals, a 50% decrease from the previous year, services dropped to 17 deals, a 33% decrease, and materials/resources and consumer/retail were essentially unchanged with 28 and 27 deals respectively. “Other” amounted to six deals, a 14% decrease from 2020.

Deal volume, though, tells a different story. There, technology/software provided 51% of the deal flow, with materials/resources amounting to 38% and consumer/retail providing 11%.

As one might imagine, of the six Idaho regions, the one with both the most deals and the largest volume of deals was the Southwest region, which includes Boise. The region accounted for 103 deals, 93 of which and $3.37 billion of which were from Ada County, with five, amounting to $5.75 million, coming from Canyon County. Boise alone accounted for $3.3 billion.

This region also had the lion’s share of technology/software deals, with 42, as well as 18 consumer/retail, 14 services, and 13 materials/resources.

Next biggest was the Northern region, which included Bonner County with four deals amounting to a total of $7.1 million and Kootenai County with 19 deals amounting to a total of $82.2 million. That region also held the two cities that came in second to Boise, Post Falls and Coeur d’Alene, tied for about $490 million each. This region also came in second in terms of technology/software deals, with nine, followed by materials/resources with eight and consumer/retail with five.

South Central had eight deals split between Cassia and Twin Falls counties and Southeastern had two deals in Bannock County.

The digital version of the 2021 Idaho Deal Flow Report will be available on May 6, 2022. To receive a link to the report, subscribe to the Built in Idaho newsletter at www.builtinidaho.org/joinbii.

This article was created as a collaboration between Boise Entrepreneur Week, Built in Idaho and Trailhead